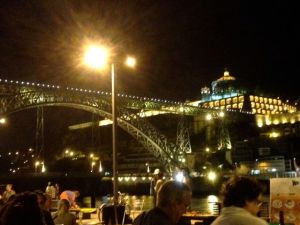 Now in its seventh year, the European Conference on Games Based Learning this time brought researchers and practitioners from across Europe (and beyond) to the picturesque town of Porto.

The conference always stands out for its participants and networking opportunities; but this year a ‘learning game competition’ had been added to the bill, which added some industry people as well as academics, making it one of the best yet for discussion and potential collaborations.

The papers themselves were a mixed bag: several presented a worrying return of the worst ‘serious game’ approach to learning games: designing basic subject quizzes with a graphical or gamified wrapper, with no pre- or post- evaluation of the approach. These hold the field back rather than helping to take it further.  But they contrasted with others which were truly thoughtful and provocative: great for filling the generous 30-minute slots with some detailed questioning and discussion.

Highlights for me were:

The first day ended with a leisurely walk through the picturesque streets and river bank of the city, culminating with a tour of one of the Port-wine manufacturer’s cellars and a meal/tasting session, which was a lovely touch and a little immersion into the local culture.

The second day closed with the results of the game design competition, which Atlantis Remixed deservedly won – with a hand-made and very clever Chemistry board game/activity ChemNerd from Jakob Thomas Holm coming second (especially interesting for its multiple events linking each stage of chemistry investigation – ending with a real live experiment). Third place went to Ian Hook and Roman Hodek of Lipa Learning, who presented their ambitious linked range of iPad games for 2-6 year olds.

All in all, I met some fabulous and fascinating new people, discussed some intriguing and important new and old approaches, and topped it off with a fine glass of port. Not a bad couple of days at all. 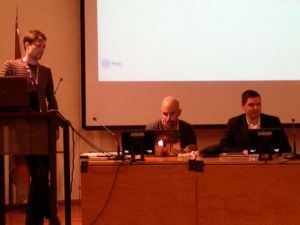 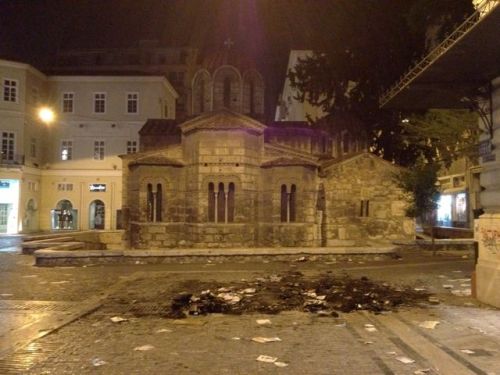 In the weeks leading up to the fifth European Conference for Games Based Learning, participants from around the globe were checking the news sites for updates on the situation in Athens. The organisers (Sue and Elaine from ACI) did a wonderful job keeping everyone up to date as the days approached, and set up a travel discussion for those wishing to share lifts from the airport on strike days.

I slowly watched many of the authors in my own mini-track on Games on  a Budget pull out due to cancelled flights (including Nic Whitton, the co-chair, although more due to safety/mobility issues given the imminent arrival of Little Whitton #2); but as I met up for conference drinks at the hotel reception on Wednesday eve, it was good to see that around 80 attendees had managed to avoid any strikes and help contribute to the local economy. Before that I’d spent the day with German experiential education expert Jule Hildmann and her partner, avoiding the police barricades and explosions from the central square; touring around the (closed) ancient sites before climbing a hill to hit a layer of tear gas and splutter back down again. 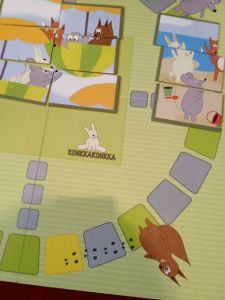 The first day of the conference had been compressed to cover missing sessions, but I was pleased to chair a near-full mini-track. The focus was on low-cost or traditional-influenced games, and the track opened with a paper by Nic Whitton on the possibilities and affordances such games present to education, and the call for more studies into this timely area (given shrinking budgets across education and heightened by the local economic crisis). I presented my work on Of Course! – the course design board game and its ability to set up a detailed context using simple games-based tricks. A beautiful, cute board game for nursery-age children in Finland with learning difficulties, Konkkaronkka, was presented by Päivi Marjanen who described how the game encouraged peer learning amongst playtesting sessions. The key to this very successful game was the close work between tutors/carers and the game designers at the start; and the extensive playtesting with the target audience; a digital version was created, but in testing it was found that the children talked to the computer and not to each other, so this development was stopped.

In the wider conference, other low cost/simple games were in evidence too: a fascinating activity presented by Ivar Männamaa (University of Tartu, Estonia) which distilled the complex and difficult issue of cultural integration into a metaphor of horses and watering holes. Using home-made, brightly coloured hexagons (fountains) and half-hexagons (horses) students have to position their horses to occupy a portion of the fountains; another team’s horses can then  choose to share or overtake some or all of the fountains. A simple but clever scoring system and rules mimic aspects of cultural integration, and initial tests have proved very effective in generating discussion around the issue which spirals out from the activity. A good example of the generation of complex contexts and ideas with simple game elements.

Other papers of interest included Io Iacovides (PhD student with the Open University) who presented her initial study of breakdowns and contradictions during gameplay: a breakdown being a short term problem or issue, with contradictions being wider problems which go against the context of the game or the needs of the player. Using special study rooms which could track player reactions, Io looked at eight game players and non-game-players in detail. In her paper and the ensuing discussion, the usefulness of these concepts in looking at engagement were considered: breakdowns (if accompanied with breakthroughs) might in fact be more engaging over time, whereas contradictions might cause a dramatic loss in engagement. Eleni Timplalexi (Athens University) described a live action roleplay for high school chemistry students, where groups ‘time travelled’ between two rooms: one a Renaissance alchemy lab where the source and properties of materials could be investigated; and the other a modern chemistry lab where the knowledge of materials could be put into practice to make useful compounds and products. Nikolaos Avouris gave an accomplished keynote on Friday morning overviewing the use of games within Museum education: highlighting the overuse of ‘games overlaid on a weak subject link’, but focussing on the growing use of pervasive games and games with a social connection such as Pheon and Ghost of a Chance at the Smithsonian American Art Museum.

As usual for this conference, the long discussion time in and between papers, and the willingness to talk (and eat, and drink) long into the night, meant that I returned with many more ideas, links and new contacts than I could cope with. Athens itself provided contrasting memories: from the sublime remains on the Acropolis and surprising us whenever we turned a corner from tourist tat to stunning remains; to the hair-raising run through narrow streets to avoid protestors and police bombarding each other with water, gas and masonry. But the abiding memory will be of a set of wonderful international friends who took it all on board in a playful way, and ensured we all learned from the experience.

Gratuitous shot of the Parthenon

Games on a budget

ECGBL 2011 will be held in Athens this year (Oct 20-21), and myself and Nic Whitton are running the following track within it:

Across the world, education is being hit hard by funding and quality crises, with increasing pressure to increase student achievement with decreasing resources. The feasibility of game-based learning can be limited by the cost of design, development or purchase. We welcome papers to this stream which focus on case studies and theoretical proposals for game-based methods which will be cheap and effective enough to be persuasive choices in this environment.

Topics include, but are not limited to:

For submission details, see the call for papers page.

Come and join us in discussing the role of games in the future of higher education; the conference is a good discursive one too, with plenty of opportunity for international networking.

One of many traditional watering holes

On behalf of my co-authors, I set off to Graz (on a plane, for the first time in years and since the security increases: give me the Eurostar any day) to present our paper on Motivation in Alternative Reality Games (Moseley, Whitton, Culver, Piatt) at the 3rd European Conference for Games Based Learning (ECGBL).

After having followed tweets from the 2nd ECGBL in Barcelona last year, I was keen to find out whether the conference lived up to its hype, and was rather bowled over. First impressions, however, were not so wonderful – with the advertised twitter tag #ECGBL rather useless to the band of twitterers due to no wifi or connection within the main building – and a very sparse attendence (40 or so for the opening plenary).

That soon changed though: a comprehensive overview of research into games in education by Liz Boyle set us on our way, closely followed by my paper (which went down a treat – literally, with my generous distribution of gummi-bears: the idea being that the person at the very back would be motivated to stay at least until the bag reached them). The Prezi for our paper is here: http://prezi.com/snzgvgwrwtzh/ – paper itself to follow shortly.

Sharing my session were two great siblings who were to share many beers with me over the coming three days: Jule and Hanno Hildmann provided a microcosm of the spread across the whole conference: Jule discussing the use of outdoor activity games to engage under-privileged students; and Hanno musing on the use of mobile devices for assessment.

This set the scene for the remaining two days, with sessions varying from board or mind games through to Second Life and 3D graphics-rich commercial quality games. What was remarkable was the level of pedagogic and learning knowledge base for a huge slice of the papers: most games had been designed with a need in mind, and solved it with considerable skill.

I’ll describe three papers which I found fascinating. The first, from Nathalie Charlier, demonstrated an ingenious and beautiful hand-crafted board game she had designed to assess First Aid training – although the game could be won by clever strategy, the assessment scores were based on knowledge which was peer-assessed throughout the game: hence allowing 40 students to be assessed without any teacher intervention.
The second was a paper by Warwick PhD student Wee Hoe Tan, which I chaired: this was interesting in that it used a commercial game (Spore) to support an A-level Biology course, but deep learning occurred not within the game itself, but in the discussions around the use and information in the game by the students and tutors – this led to an interesting discussion in the room, and suggests that even poorly linked off-the-shelf games (which Spore was not, I should note) could be used as catalysts for high quality learning.
Thirdly, the paper by Fiona Littleton and Hamish Macleod from Edinburgh provided a fascinating window into their MSc course in eLearning, which immerses their students in Second Life, World of Warcraft etc. From discussions I’d had with Hamish and Fiona over dinner, I knew how forward thinking this course is, and the audience again provided a good prolonged discussion of the various merits of the games platforms and whether technology in itself is a key factor, or if the benefits are more related to roles, personalities, memorable events etc.

Graz itself is a very beautiful (in an austere way) small city, with a central berg and the new blue heart-shaped kunsthaus dominating the skyline. The conference dinner was held in the latter, and a great time was had by all – as the clock struck midnight, I was able to celebrate my birthday with a hearty international group, fuelled by the local beer and hearty slab-of-meat based dishes.

Tchüss, Graz; and make a note of October 2010, when the ECGBL will move to Copenhagen.