Hopping on the train down to London yesterday morning, I cleared my mind and left an expectant open plate (pate?) for what I hoped would be a varied, surprising, off-the-wall day of talks as part of The Story 2011: “a one-day conference about stories and story-telling”. Twelve hours later, the p(l)ate was certainly piled high.

Held in the evocatively peeling Conway Hall, and packing some seriously weighty speakers in 20-minute slots over the six hours, the day was hosted by Margaret Robertson, of Hide&Seek fame (they of the wonderful boardgame remix kit). Margaret held things together very playfully – noting, like many of the game designers in the varied audience, that she was leaving behind her rule-sets for a day and focussing on the storytelling side of games.

Part of the (fabulously affordable) fee was a donation towards the Ministry of Stories – who operate storytelling events for children behind their Monster-shop façade in Hoxton – and the Ministry started the proceedings with a crowd-scourced description of a monster we named Pedicureus – which had ‘eyes yellow and prickly like pickled onions’, and ‘ears flaky like the Windows operating system’ (oh, and my favourite: a ‘sordid tail like a… sword’). This proved to be the only interactive talk of the day, but (as could be seen from the relatively light tweet stream) most of us then settled back to simply listen, think and enjoy. 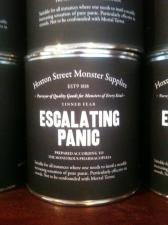 A can of escalating panic, from the Hoxton Monster Shop

Matt Adams outlined the varied work of Brighton-based artist collective Blast Theory, the most interesting being their collaboration with Channel 4 Education on Ivy4Evr – SMS text-based ‘short interactive fiction’ which used a combination of short story pieces with ‘stubs’ or nodes where players could respond to a message and receive follow-up messages for a mini conversation thread, before returning to the story pieces: a very effective mini story in only 40 SMS messages. Adam Curtis, the BBC archive-miner/documentary producer, then gave the most thought-provoking talk of the day (and was the one time the ‘no questions: move on’ policy of the day left us itching), effectively claiming that the internet/TV is stifling the development of new types of stories – only emotions or ‘moments of experience’. Adam kept nipping off on (interesting) red-herrings, and the irony was that he, and we, were creating our own new stories as we listened.

After coffee, Karl James – through excerpts and stories from his Dialogue Project – gave us some compelling (and moving) examples of why it’s good to listen. The thing which still resonates with me now was his description that “words disappear as you read them: only the change they caused remains with you”. Cornelia Parker was next, giving us some fascinating stories behind her scupltures: a feast of narrative and vision. Then Phil Gyford took us back to the 17th Century with his astounding Samuel Pepys blog, telling us about the community which has sprung up around it, the way they continue the stories, and the hilarious set of mysterious characters from his diary who have started to respond to Pepys’ daily tweets – and who are creating new narratives around the old story.

Quick refresh and reflect over lunch, then the day’s only disappointment: Tim Kring was held up stateside, and was unable to present. Collective sigh, but we soon perked up with the first of two on-stage interviews: Paul Bennun talking to Nick Ryan about the use of audio in games (the pair worked together on the clever audio-only Papa Sangre iPhone App); demonstrating how we all create our own personal stories when visuals are absent (the sound of a telephone played to the audience revealed that some of us thought it was blue, red, black etc. – although in fact, I didn’t hear a telephone at all: I heard a storm. Not sure what that says about me, but it proved the point perfectly). Mary Hamilton then brought hilarious chaos to the room, in the form of Zombie Live Roleplaying, and the firing of several high-powered foam projectiles into the room (the stories coming from shared tales of brain-mushing around the campfire at the end of a live event).

Two artists told their own stories about their work and the narratives surrounding it: Lucy Kimbell‘s ironic and slightly worrying project involving family and friends completing an ‘audit’ on various personal aspects of her character; and Martin Parr‘s fabulous little anecdotes surrounding the photographs from his early career in North Yorkshire and elsewhere: pictures with an accompanying 1000 words. The second interview of the day then left us spellbound – and in stitches – for what seemed like hours, as Graham Linehan (he of Father Ted and the IT Crowd) talked to Cory Doctorow (of Little Brother, Makers and other tech-fiction) about the processes he uses to create storylines for his programmes. There were some lovely ideas, and hilarious anecdotes – Graham revealed that he uses coloured cards with main plot ideas, then shuffles them around on the floor and matches cards together to create connected story-lines; but also that he’s recently been using Basecamp to share and develop ideas with a group of disparate writers. I’ve used Basecamp before (for the Operation: Sleeper Cell ARG) and found it as useful, and infuriating, as Graham.

Graham explains the cat-crazed world of Moss to Cory

Mark Stevenson closed the day with a frenetic (he had just stepped off the plane from Seattle, and seemed to still be travelling at Mach 2) whizz through his round-the-world trip to discover all the hope which exists for a brighter future for his forthcoming book. Hard to catch at times, but at moments fascinating, it was a good mirror to our thoughts as the event drew to a close: a story of hope and an interesting future, just waiting for new stories to emerge.

Many thanks to Matt Locke for organising such a fabulous variety of speakers and topics, and for a wonderful day. If the discussions and ideas flowing around the beer in the local pubs afterwards are anything to go by, The Story won’t stop here.